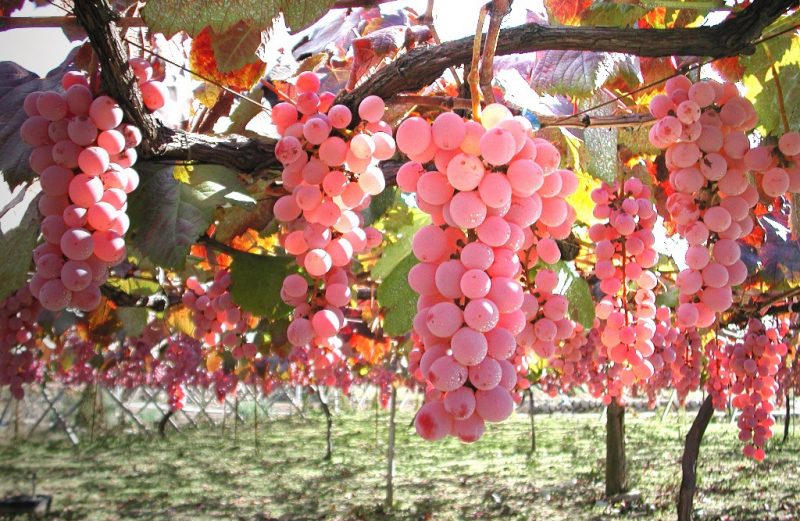 There are around 5000 species to be considered as grapes for making wine in the world, but roughly 1000 species are grown in order to produce wine in fact. International grape variety such as Chardonnay and Cabernet Sauvignon is well recognized. Wine lovers with good knowledge also notice indigenous variety like Nebbiolo from Italy and Viura from Spain. How about Koshu? Is it grape or place?

Koshu (甲州) is an ancient name of Yamanashi prefecture, and is defined as one of the grape variety. Its pink skinned grapes produce white wine, and historically grown as table grape for long time in Japan. Koshu grape can grow anywhere in Japan, but it flourishes in Yamanashi accounting for 96% of entire production. Here is the Koshu grapes. It looks quite similar to Pinot Gris / Pinot Grigio (Picture right above)

Where is Koshu originally from?

Recent DNA study (2013) showed Koshu was natural hybrid of Vitis Vinifira  and Vitis Davdii, in other words, offspring of different species; Vinifera (indigenous grapevine from Southern Europe and Western Asia) X Davidii (wild grape specie in China). One of the vinifera grapes originally grown at The Caspian Sea Coast area in central Asia had travelled all the way through Silk Road and interbreed naturally for hundred to thousand years in China and eventually further moved and settled in Japan. There is long trading history between China and Japan since AD220, which indicate culture (including Buddhism) and many crafts from China were shipped to Japan. Most likely grape seed, grapevine or grape itself together with Buddhism were transferred to Japan 6 to 7 century. Since then,  Koshu was grown locally and spread within Japan.

As I mentioned above, Koshu grape looks like Pinot Grigio, perhaps taste-wise is also similar with Pinot Grigio. Before moving to Koshu, I would like you to clarify the difference between Pinot Gris and Pinot Grigio.  Actually, both are same grape variety, just different name, but resulting wine are totally different. The wine stated in Pinot Gris is fuller and weightier while Pinot Grigio’s one is leaner and much delicate. Why? The harvest time = ripeness level of grape is different, the former is later to pick and the latter is earlier, therefore, Pinot Grigio has zesty and crisp acidity rather than softer and round acidity that Pinot Gris style wine has. Let’s go back to Koshu? Koshu has also crisp, zesty acidity and delicate to mild structure, which positioned between Pinot Gris and Pinot Grigio. Some style is very delicate with citrus flavour (grapefruit, yuzu), others is rounded, generous oaked with floral (white flower). In addition, Rice cake or rice lees, as we say “Koji” flavour is found in Koshu, but not in Pinot Gris/Pinot Grigio. Here is different type of Koshu below;

Koshu, it is still new to be in Hong Kong market, yet its diverse style will promise to fit your situation as aperitif or dining. Why don’t you try them and please tell us what you like.