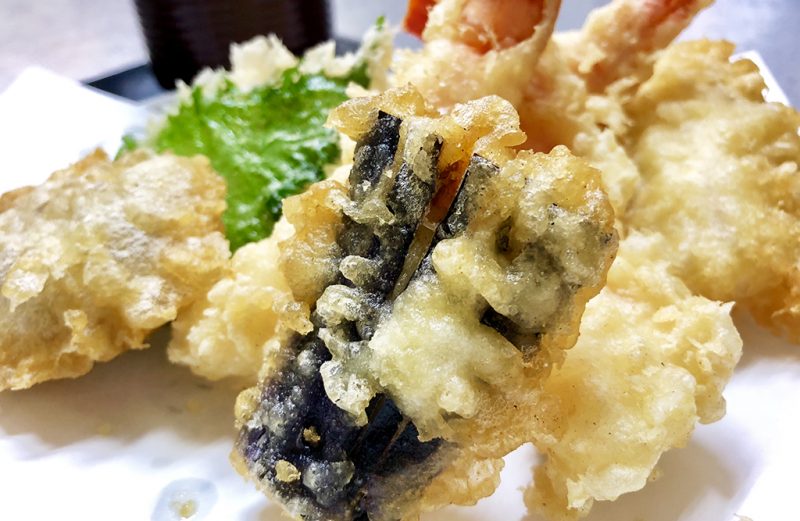 I have recalled my old school memory about English textbook in Japan and one of the chapters was a Japanese boy explained Tempura to one of the students from abroad.  Now that Tempura is recognized as one of signature Japanese food and its reputation is spread out world-wide. I really love Tempura personally and I rarely hear people dislike or hate it, which I am glad to know. Tempura are lightly battered with seafood or vegetable in tradition. According to definition of Tempura at Wikipedia, meat is also added in English version not in Japanese one, and as my personal opinion as Japanese, meat are not usually used. Recently modern style tempura is created, meat could be one of the choices, however it is not used traditionally.

The cooking technique of battered and deep-fried was introduced by the Portuguese missionaries in Nagasaki around 16th Century at the beginning, and “Nagasaki Tempura(長崎天ぷら)” which is sweet and deep-fried in pork oil was born there. It was eaten without any sauce due to usage of strong flavorful dough. This original Nagasaki Tempura was transmitted and modified in Kansai region (the area of Osaka, Kyoto) in 17 Century and kept on further developing in Tokyo around 18 Century. Once Tempura reached in Tokyo, many type of seafood was added as ingredients along with vegetable because seafood was easily caught and sold at fish market at Nihonbashi (日本橋) and sesame oil was selected to use for Tempura. This based on Edomae  (江戸前) style tempura and it was widely accepted by locals as street food in the beginning. The positioning of Tempura in Japan is varying from very casual such as take-away at supermarket to craftmanship food at authentic Tempura restaurant, in addition, it had remained as one of the popular homemade food for long time. The picture shown below, it is the interesting Nishiki-e (錦絵) indicating how locals enjoyed street food  in Edo period (江戸時代).

This Nishiki-e (錦絵) , multi-coloured woodblock printing (photo above), was created by one of the famous artist Hiroshige Utagawa (歌川広重) in 1837. You can find Tempura stall at the center of the picture.Other food such as Sushi, Grilled eel (うなぎ) as well as Tempura were also provided at food stall in Edo period as casual food. Especially for Tempura, Edo Shogunate (江戸幕府) banned to cook Tempura inside house, therefore all Tempura were served at outdoor. Why? For cooking Tempura, there were so many cases to be caught the fire by handling high heat cooking and fire easily spreads out to become more worse situation because local’s houses are built densely. However after Meiji Era, Tempura started to serve at authentic restaurants such as Ryo-tei (料亭) or specialised Tempura restaurant gradually. Tempura Soba (天ぷらそば：Buck wheat noodle with Tempura in soup) is normally served at casual restaurant as well at standing food eating area at many stations in Japan, whereas it hardly to serve Tempura itself at standing eating area or food stall in outside festival nowadays.

There is Edomae category for Sushi. How about Tempura? Yes, it exists. What is a different between Edomae style or Kansai style for Tempura? I interviewed one of  Tempura master chef (Taisho:大将) Toyoichiro Seki, who is an owner of Ippoh (一宝), one of the Michelin guide restaurants in Hong Kong. Ippoh, specialised Tempura restaurant, established in 1850 in Osaka and there are three branches including two in Tokyo and one in overseas – Hong Kong.

According to Seki, the difference between Edomae and Kansai is types of oil for cooking. Sesame oil is always to be used for Edomae whereas Kansai / Kamigata (上方) is not. That means if you eat Tempura in Tokyo, it is nearly equal to Edomae style unless restaurant or chef states Kansai or others. On the other hand, if you eat Tempura in Kansai (Osaka, Kyoto), each restaurant chooses different vegetable base oil such as safflower, canola, corn and cotton seed. Some branch restaurants originally from Tokyo could use sesame oil in order to follow Edomae main restaurant style even in Kansai. Ok. Why is sesame oil selected mainly in Tokyo? Sesame oil was used for Tempura historically in Tokyo, in addition Seki said “Sesame oil makes Tempura much crispier.” However, it is disadvantage of sesame oil and Seki continued to add “Resulting Tempura by using sesame oil becomes heavy.” Well, sesame oil itself to compare with others, it is very flavourful yet quite heavy weight on palate. It is like same issue for peanuts oil in Hong Kong. The capacity of having heavy food depends on person, but especially course of Tempura provides 8 to 10 different tempura dishes, therefore purposely lighter oil is chosen in Kansai.  Moreover, food preference style by regionality could be applied as delicate light flavour is well-adopted in Kansai whereas much stronger flavour in Tokyo.

This theory can also be applied to Tempura sauce called by Tentsuyu (天つゆ)  in general and Tendashi (天だし) for Kansai style. It is same meaning but intensity and weight on palate is different as Tendashi is much lighter and delicate, moreover it can be taken as soup too. At Ippoh, only Seki can prepare Tendashi, that means nobody cannot touch for Tendashi making except Seki. Seki said “Tendashi is one of the most expressive items by restaurant’s strong preference. (It is really traditional Japanese spirit because of style or philosophy of restaurant rather than individual head chef’s one.)

Any other rules for Tempura?

As mentioned above, you can make Tempura at home as Japanese do, but resulting Tempura is totally different to compare with one in restaurant. Tempura cooked by professionals retain both crispiness and moistness in balance. How can they achieve it? Seki explained “The temperature and timing are key. Gas stove can rise higher temperature than electric one, which affects the degree of oil temperature, and timing both for putting ingredients to oil and picking it from oil is also crucial.” Ah, there is no wonder why homemade tempura is quite moisturised.

How about timing for eating? It was mentioned that the best timing to eat Tempura is right away you receive it. However, some are not tolerance to have very hot things like me, in this case what to do? “No need to rush to eat for those who have a tongue too sensitive to heat and take your own pace.  The theory for eating right after served is recommendable, but I suggest not to leave it for long time in order to enjoy Tempura.”, emphasized by Seki. Actually, there is no exist of strict rules for customer side, which seems to link to back ground of street casual food.

Tempura is internationally recognized Japanese food and you can easily find it especially in Hong Kong beside Japan. The price range of Tempura depends on restaurant category, but those sold in supermarket or grocery in Japan are very reasonable price. In Hong Kong, you can find it certain upper range supermarket for take-away. There are many choices to enjoy Tempura now by different style, occasion or place. Its diversity fascinates many people.

Special thanks for Master Chef. Seki